October 07, 2019
This blog series is dedicated to Hampta pass trek - a crossover trek from Kullu to Lahaul and Spiti valley at an elevation of 14,380 ft which is the best monsoon Himalayan trek. This blog post is the experience at the third campsite - Balu ka Gera Hampta pass trek. 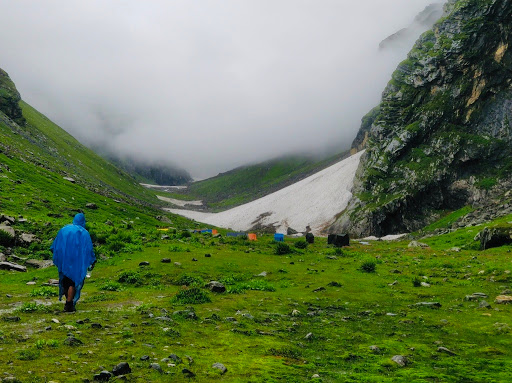 Still struggling with sleeping bags! Our trek lead's wake up call at 6 am and I had to wake up! It was drizzling in the morning already! A beautiful day showered me with the raindrops as soon as I came out of the tent. Remember the wildflowers of Jwara, waking up to it made my day! Soon started with daily chores, and just imagine brushing teeth with raincoats on! :D Munched on breakfast, it was already late! It was 8:05 am, I was still lacing up my shoes and obviously got scoldings from the trek lead for not being on time :| With all these we started trekking to the magic of monsoon.

It was monsoon! It felt to me that - this must be the best monsoon day of my life! Yes, because it rained all throughout the trek. I started the trek with raincoats on, ears and head covered with a baraclava, sprinting with the splashing raindrops sinking into my cheeks! The initial stretch was trekking via bushy trails along the river. The atmosphere had fogged up making it more dramatic. To add the colours to the trail, there were these beautiful pink flowers called Bistoria Affinis bloomed to the fullest! Mungaru male rain tunes humming in mind syncing with the raindrops, and the petrichor scent which I can still remember, cannot ask more treat for this wanderlust soul!

At 11 am, we crossed by a small pitstop where we all had delicious omelette and chai! We spent almost an hour time chit-chatting here, waiting for the order and having the food. We could notice suddenly that we all started feeling cold! That's because the body is at rest and not moving, so body produced less warmth compared to when trekking. The trek leads soon gave a call to resume the trek and we felt better!

After trekking for 2 hours, there was a drastic change in the views. The valleys became narrower and we trekked between huge mountains on either side. Soon the roar of the water disappeared and the silence of snow dominated the surroundings. The rock-solid white glacier patches became our way! They were not that white as I had imagined, they had brown mud deposits, making it look not so pretty :D (don't call me racist :P). The surface was spiky, because of which most of us kept falling! Well, it requires some time and observation to master walking on the snow patch, which we mastered to some extent.

Another thing to be careful is that we can't predict the snow thickness! It can be possible that you step on the thin ones means the patch mostly on the edge or attached to rock! That's quite dangerous because its the chilling river which is beneath this snow patch! So be careful to watch out and follow the path which the trek lead takes than creating your own! The temperature drops were expected and the atmosphere fogged up in no time. The group looked like white walkers walking on the ice! :D

It was 1:15 pm, we spotted the yellow tents! Hurray, we were at Balu ka Gera at an elevation of 12,411 ft! Balu ka Gera literally means the mound of sand in Hindi. This campsite is believed to be formed by the dust and sand brought by the river. When we neared the tents, we found that the tents were on a slant surface and the campsite was a slush of mud. The washrooms may be at 12,460ft :P, which was again an effort to trek! The views were out of this world! The giant mountains surrounded us, A view of Mount Indrasan to the left and Hanuman Tibba to the right! The snow-capped mountains were a treat to watch! A lake kind of patch adding to the reflection of the mountains and the yellow flowers bloomed all over the campsite! One word - Paradise!

It was lunchtime and as already stated, the impressive plate of food from IndiaHikes delighted us! Our trek lead always said Ghachke Khao - meaning to eat as more as you can and we followed only this order of his sincerely :P The health records were at the edge of the eligible readings. It is 12,411 ft come on! It is 4 times more than the elevation of Bengaluru! I could feel the difference of inhaling capacity slightly when I sip the tea! Watch out for this experience and let me know :D The prominent thing was the amazing group of trekkers we were! It has been 3 days, we all got to know eachother and a crazy group of friends already. Spent the night in the dining hall conversing stories, playing UNO :D It was tough to get highly demanded UNO cards! Sagar did his bit and was successful in getting us the cards :D It was total fun and it's all so memorable! We dozed off to sleep happily :)

This was the third campsite Balu ka Gera Hampta pass trek experience. If you have any queries, please email me or add comments here.

Are you excited for the Hampta pass trek? Come let me take you there through this blog series!  Follow me on Instagram.

Popular posts from this blog

December 03, 2016
"To not know what happened before you were born, is to forever remain a child" - Cicer, Roman philosopher. History and heritage have always excited me. The palaces, forts and rulers, and what remains today is a small part of their dream centuries ago. Being in Bengaluru for such long years, I had this urge to discover Bengaluru's history and heritage. A weekend fortnight before, I chose to visit the Bengaluru fort and Tipu Sultan's Summer Palace, Bangalore which is located in the heart of the city market. The Bengaluru fort covered a huge area and also enclosed the Tipu's palace. Sadly, only 5% of the fort remains today. Have a look to discover Bengaluru Fort and its history. Tipu Sultan's Summer Palace is a unique palace. A typical palace will have rich marbles, carvings and filled with luxury. But, this is an unconventional palace made up entirely of teak wood and has its own grace. So, let me take you through the tour of this palace. [caption id="atta
1,482 comments
Read more

October 30, 2019
Gokarna Beach trek blog - Complete trek experience Hola people, Ever wondered how's the beach trek look like? Ever curious how do beach and trek are related? Well, if you have the curious question then this blog post is for your curious mind. Gokarna is a beautiful blend of beaches and hills. It is well known for its clean beaches of Arabian sea and series of western ghats hills surrounding them. In short - Gokarna beach trek is all about hiking from one beach to another to find new horizons through the rocky and rustic trails of forests. Ready to explore Gokarna beaches? Here we go :) Gokarna beach trek is a DIY trek Gokarna beach trek trails - Sea and hills and me!  Yes, you heard it right! Gokarna is a complete Do It Yourself trek. With that I mean, you DO NOT NEED any trekking company like Thrillophilia to do this simple trek. A group of friends or even solo backpackers can hike without any hassles. The trek trails are well defined and there is no chance of missing out. Moreove
13 comments
Read more

March 15, 2018
As we grow older, our time with our parents becomes more limited. I believe that at some point in our adult lives we should take the time to travel with our parents.  My parents are the coolest and supportive of my travelling endeavours.  When it comes to planning the trip with my parents, I take extra care to choose places of their interest - mostly architecture and nature. I'm born and brought up in Bangalore (also my mother's hometown) and we have settled in Bangalore for around 25+ years. My Dad's native is a small village Sirihalli, which is in Shimoga district. It had been a long time we visited my grandparents as a whole family. So we decided to take a road trip to Sirihalli. A list of places marked down on the way and we started out to hit the Tumkur road. The first destination - VaniVilasa Sagara dam. My Dad loves driving car, I can say its the best thing he enjoys.   Often, I travel with a group of friends and sometimes for a family break, I plan a trip with my pa
9 comments
Read more